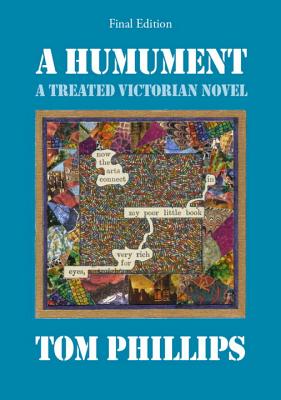 “One of the most winning and witty artistic experiments of recent time." –Washington Post

In 1966, Tom Phillips took a forgotten nineteenth-century novel, W. H. Mallock’s A Human Document, and began working over the extant text to create something new.The artist writes, “I plundered, mined, and undermined its text to make it yield the ghosts of other possible stories, scenes, poems, erotic incidents, and surrealist catastrophes which seemed to lurk within its wall of words. As I worked on it, I replaced the text I’d stripped away with visual images of all kinds. It began to tell and depict, among other memories, dreams, and reflections, the sad story of Bill Toge, one of love’s casualties."

After its first publication in book form in 1980, A Humument rapidly became a cult classic. This sixth and final edition, published to celebrate the fiftieth anniversary of Tom Phillips’ first experiments with A Human Document, presents for the first time an entirely revised and complete version of A Humument, and will bring to a close half a century’s artistic endeavor.

The English painter, writer, and composer Tom Phillips curated the groundbreaking exhibition “Africa: The Art of the Continent” at the Royal Academy in 1992. He is himself a collector of African art, specializing in the arts of Ghana and the Ivory Coast. His other books include The Postcard Century.
Loading...
or support indie stores by buying on