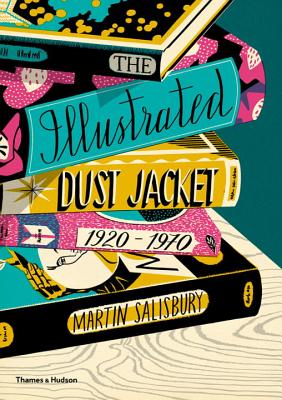 A deep dive into the history of the illustrated book jacket, tracing its development across the twentieth century, reflecting some of the most iconic designs of the era

In the modern era, the “beautiful book,” an art object in its own right, has become the key to the ongoing attraction of print publishing as physical books continue to distinguish themselves from the screen.

Author Martin Salisbury traces the evolution of the book jacket from its functional origins as a plain dust protector for expensively bound books to its elaboration as an artistic device to catch the eye of browsing book buyers. The increasing awareness of the jacket’s potential to serve as a marketing tool across various areas of the publishing world—from literary fiction to academic titles, and children’s books—meant a proliferation of illustrative treatments. The book jackets reproduced here reflect the changing visual styles and motifs of the passing century, beginning with the Art Deco period and continuing through Modernism, the playful Thirties, the pre- and postwar Neo-Romantics, the new consumerism and realist subject matter of the Fifties, and the Pop Art of the Sixties.

Featuring talent from the US and UK, Cover Up: The Illustrated Book Jacket explores the pictorial dust jacket through a selection of more than 300 key works and artists that influenced the course of book jacket design.

Salisbury’s book shows that the greatest jackets tint our experiences of the books they grace. He guides us with easy authority through a delightful graphic history of all-too-often underappreciated literary pleasures and reminds readers just how much wonderful art they may have hidden away on their shelves. For those who never paused to think much about jackets, this book will be a revelation. For those who do, it will be nothing less than a thrill.

Vivid, gorgeous art graced books in the mid-20th century, and Martin Salisbury has collected the most stunning examples in The Illustrated Dust Jacket, 1920-1970.


I had not come across the majority of the exceptional specimens in Martin Salisbury’s The Illustrated Dust Jacket 1920–1970. His book is organized by designer and contains a wealth of mostly English and a few American designers whose work is as beautiful as it rare. I’ve spent the better part of two months poring over every jacket and have not regretted a moment.

The Illustrated Dust Jacket, 1920-1970 by Martin Salisbury, chronicles how this once disposable object became a major creative force in publishing.