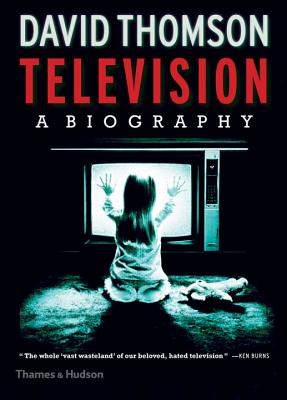 “The invention, or the quaint piece of furniture, wandered into our lives in the 1940s, as a primitive plaything, a clever if awkward addition to the household. It was expensive, unreliable and a bit of an invalid.” —Television, A Biography

In just a few years, what used to be an immobile piece of living room furniture, which one had to sit in front of at appointed times in order to watch sponsored programming on a finite number of channels, morphed into a glowing cloud of screens with access to a near-endless supply of content available when and how viewers want it. With this phenomenon now a common cultural theme, a writer of David Thomson’s stature delivering a critical history, or “biography” of the six-decade television era, will be a significant event which could not be more timely. With Television, the critic and film historian who wrote what Sight and Sound's readers called “the most important film book of the last 50 years” has finally turned his unique powers of observation to the medium that has swallowed film whole.

Over twenty-two thematically organized chapters, Thomson brings his provocatively insightful and unique voice to the life of what was television. David Thomson surveying a Boschian landscape, illuminated by that singular glow—always “on”—and peopled by everyone from Donna Reed to Dennis Potter, will be the first complete history of the defining medium of our time.


Praise For Television: A Biography…

A large, lavishly illustrated, erudite, and richly analytical look at television and its influence. Thomson closely examines the medium’s cultural impact by taking a largely thematic approach to revealing just how pervasive it has become in our lives.
— Booklist

Thomson has written an enthralling and very necessary book about the complex medium of television [which he] considers almost as a life form. [He] loosely divides his book into McLuhan-esque halves, 'The Medium' and 'The Message,' [but] isn’t doctrinaire about his construct, and we’re the better for it as he chats away, making thought-provoking and always entertaining observations about television’s explosive growth. Thomson has trained his singular vision on the dominant medium of our lives, our constant — if not always welcome — companion, tightening its hold on our culture and our minds with a proliferation of portable screens. What readers will take away [is that] you cannot love television and understand its preeminent role in contemporary life without contrary feelings of resentment, disappointment and even outright hatred.
— San Francisco Chronicle

The eminent film writer offers a personal celebration of his particular fascinations and a provocative consideration of the ways in which the very mechanics of the medium affect the audience, both as individuals and as a mass culture. Thomson's insights are typically unsparing and acute, and while many of the implications of his argument are troubling, his love and admiration for the best of TV are palpable. A bracing, essential engagement with the ramifications of our lives before the small screen.
— Kirkus Reviews

The film critic brings his idiosyncratic, essayistic approach to this volume about the small screen. Don’t expect a formal history; Thomson instead bobs and weaves his way through shows and themes, from “The Donna Reed Show” and “I Love Lucy” to “Friends” (“as flimsy and essential as tissue paper”) and “Breaking Bad” (“like a novel by a master storyteller”).
— Newsday

A splendid, panoramic, multi-faceted examination of the medium and its messages, spread out from its humble beginnings to its contemporary spot in the 21st century’s busy crossroads of high-tech pop culture.
— Parade.com

Film critic Thomson turns away from his usual medium of choice, the big screen, and tackles the history of the ‘elephant’ in our living rooms. This is not an appraisal of hit TV shows and their players, but rather a sharp analysis of its impact on collective consciousness. Thomson provides valuable insight in [this] readable examination of this pervasive medium over the past 60 years.
— Library Journal

Absorbing and authoritative… Television: A Biography is a definitive read on the subject of television. It’s a majestic book, in its physical shape and the content found inside…a warm, readable account of television’s enveloping history. [Thomson] gives us an exquisite account of television’s cultural impact, pieced together through cherry-picked shows, stars and genres of the medium. His compact, fluid writing style is at odds with the amount of ideas and concepts he pushes into the reader’s view, allowing them to think a little deeper about the cultural implications television often comes with, but always ties together the loose ends into a satisfying conclusion.

Always insightful but never condescending… [A] magisterial survey of English-language television and its impact on both sides of the Atlantic. Whether Thomson is considering black-and-white or multi-colored programs, from today and past decades, embarrassments as well as the best and the brightest, he brings everything he writes about to life with an immediacy and quite outstanding vividness.
— Washington Times

Deeply insightful, gracefully written, totally compelling... Plow through this 416-page anthropological monster and you will know all you need to know about the evolution of TV over the last 70 years and—more important—how and why it has assumed such a central position in our lives. Thomson’s pricy book is worth it because he thinks differently and has written the real thing when it comes to understanding the 500-pound gator in the room.
— LA Weekly

Critic David Thomson offers an intelligent and lively survey of the history of television. The subject of this ambitious study is vast. As of 2015, by Thomson's estimate, some 5,000 years worth of television, from the sublime to the execrable, have unfolded before our eyes. Thomson commands this surfeit of material impressively, and his taste is eclectic. Television: A Biography captures the ‘ordinary, casual pleasure to be felt with television,’ though it's ‘tinged with unease at what the medium has done to us.’ Anyone who's been alive in the era of TV would have to concede, as David Thomson eloquently demonstrates here, that its transformational influence on every aspect of life in the United States has been nothing less than profound.

One of the great books about television extant. [Thomson] is able to think about the medium provocatively, profoundly and originally. Whether you think of it as a David Thomson book or a book about television is of no matter. Either way, it is a book worth waiting decades for.
— Buffalo News

Unlike almost all critics, David Thomson is unafraid to see, to read, to experience or re-experience the story television tells as true history—not a reflection, but a version of what really happened in the world at large, and what may.
— Greil Marcus

The greatest writer about the big screen has now written a defining book about the small screen.
— Geoff Dyer

A panoramic history of television that’s full of thoughtfulness, gusto and intelligence. It’s also extremely entertaining. At the moment when screens are finally everywhere, David Thomson is out to decide how we salvage excellence from ubiquity.
— David Hare

Only a mind as resourceful and clever as David Thomson's would have the courage to try to put his arms around the whole “vast wasteland” of our beloved, hated television and make some idiosyncratic sense of it.
— Ken Burns

David Thomson is a film critic and frequent contributor to the New York Times, the Guardian, and more. He is the author of The Biographical Dictionary of Film, now in its sixth edition, and Moments that Made the Movies.