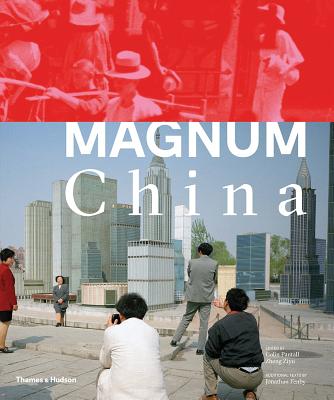 This lavishly illustrated book is the history of China, spanning the pre-revolutionary years to China’s present day rise as a global power as told through the Magnum photo agency’s legendary photographs.

Magnum Photos first covered China on assignment in the 1930s, when Robert Capa and Henri Cartier-Bresson established what has become a long-standing cultural engagement with the ever-changing country. Magnum’s long history with China puts the agency in the unique position of being able to provide an in-depth photographic account of China, its people, and the changes they have witnessed over the last nine decades.

Featuring an outstanding selection of photographs, Magnum China is a thorough illustrated history of a vast, enigmatic country, fascinating for China-watchers and novices alike.

Chronologically organized into four parts, charting the history of China from 1933 to the present day, Magnum China presents in-depth portfolios by individual photographers, accompanied by introductory commentaries on the featured work and group selections that curate individual photographs to illustrate the diverse state of China. Each part also features an introduction by respected scholar Jonathan Fenby, as well as "key dates" timelines and lists of the photographers’ travels, setting the socio-political and historical context for the photography on show.

Magnum China presents the back story that led us to the country we know today. The images, ranging from World War II to the present, are by some of the world’s pre-eminent photographers who witnessed conflicts like the Communist victory, the squashing of the student uprising in Tiananmen Square, and the high-speed economic transformation.

Zheng Ziyu is based in Guangzhou, China, where he is Senior Photo Editor of Southern Metropolis Daily.

Colin Pantall is a writer, photographer, curator, and lecturer specializing in documentary photography.

Jonathan Fenby is a former editor of the Observer and the South China Morning Post, and is a former bureau chief in France for theEconomist and Reuters. He is the author of ten books, including the acclaimed biography Chiang Kai-Shek: China’s Generalissimo and the Nation He Lost and The Sinking of the Lancastria, which tells the story of the greatest disaster in British naval history. He was made a commander of the British Empire and a knight of the French Order of Merit for services to journalism. He lives in London.
or support indie stores by buying on