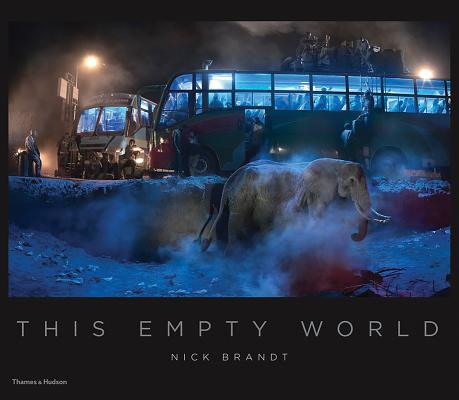 A new collection of images by celebrated photographer Nick Brandt, whose epic, disturbingly beautiful panoramas address the escalating destruction of the natural world at the hands of man.

Moving into color photography for the first time, this monograph of new work from photographer Nick Brandt is both a technical tour de force of contemporary image making and an ambitiously scaled project that uses constructed sets of a scale typically seen in major film productions.

Each image is a combination of two photographs taken weeks apart, almost all from the exact same camera position. The starting point of each composition is always the animal photographed in its native savannah landscape. Brandt then designs and builds sets in the precise location of the original photograph depicting the human developments, such as gas stations, highway and bridge construction sites, and bus stations, that are invading the East African landscape. A second sequence is then photographed with the completed set, populated by a large cast of people drawn from local communities and beyond.

The final images are powerful composites of the two source photographs, which presents the wild animals and the people as equal victims of the environmental—both now aliens in their once-natural, once-native habitat.

Including an introductory essay by Nick Brandt and a descriptive behind-the- scenes section, this new book is a must-have publication for all fans of Brandt’s work.

Brandt’s introductory essay describes his ‘outrage overload’ and his passion for making a difference. The 70 large plates are magnificently printed and give us a strong sense of the majesty of the animals as well as some of the human pressures. This is where the very large format of this photobook really shines (it would be a notable addition to anyone’s coffee table).
— Photobook Journal

The astonishing images in This Empty World by Nick Brandt deliver the emotional shock rarely felt, but urgently needed, to accelerate global conservation.

Stunning...Nick Brandt's This Empty World is a bold assault on human greed, capitalism and consumer culture.

This Empty World showcases stunning scenes of animals and humans trying to live side by side in a rapidly developing environment...A stunning cinematic quality...

Extraordinary work...This Empty World is a truly smart way of raising awareness, for it forces us to rethink our expectations, our take on photography, and ultimately, the destruction of our planet.

Highly crafted images on a panoramic scale..This Empty World is a masterpiece.

This Empty World is a captivating account of wildlife colliding hard against an endless tide of human encroachment. Brandt's masterpiece images reflect the ambivalence of a world looking away from its own shadows. The images are monumental achievements.

This Empty World is a blazoning exploration of the vulnerability of animals and humans in an era of environmental degradation. Brandt's vision communicates the urgency of environmental issues with undiluted conviction. The works' impact, immediate and direct, is informed by a painstakingly deliberate and nuanced process. Brandt's finished works...of the wild animals and the human-inhabited sets, create startling scenes of the two worlds in direct dialogue.

Nick Brandt’s photography focuses exclusively on the disappearing natural world. Exhibitions of his work have been seen in museums and galleries across the world.
Loading...
or support indie stores by buying on