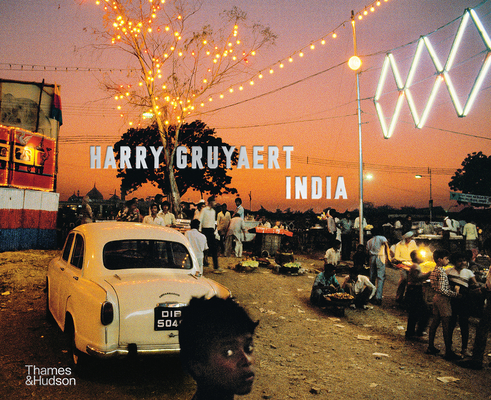 This book from award-winning Magnum photographer Harry Gruyaert collects his photographs of India, featuring his trademark use of color.

For more than thirty years, celebrated photographer Harry Gruyaert has crisscrossed India, capturing the people and places of the subcontinent with his camera. This book brings together 150 of these images, many of which have never been seen before.

Harry Gruyaert: India attests to the photographer’s clarity of style: his interest in story, public spaces, and surprising scenes, all punctuated with vibrant colors. From bustling streets in New Delhi or Calcutta, to the modest villages of Tamil Nadu and Rajasthan, and the great religious city of Varanasi, “color must be essential,” Gruyaert says. Transcending stereotypes, these images show some of the many faces of India through Gruyaert’s unparalleled vision.

This collection includes striking images of women in purple saris beating grain, dyers busy at smoky vats, encampments of shepherds preparing for a new day, and other scenes of daily life. In keeping with Gruyaert’s oeuvre, these scenes capture the sensory atmosphere, with subtle chromatic variations, painting a revelatory picture that neither romanticizes nor exoticizes the subject.

Gruyaert's India is crowded, vital, nonstop, pulsing with color and texture, and as remote from our tidy Western lives as if the photos had been taken two centuries ago.
— The New York Times Book Review

Harry Gruyaert is renowned for his photographs of India, Morocco, and Egypt as well as of the west of Ireland, and for his use of color. He is a member of Magnum Photos, and his work has been exhibited widely.

Jean-Claude Carriere is a French novelist, screenwriter, actor, and Academy Award honoree. He was a frequent collaborator with Luis Bunuel on the screenplays of the auteur’s late films.
Loading...
or
Not Currently Available for Direct Purchase