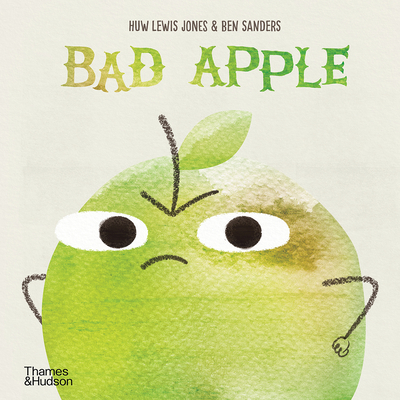 One bad apple is up to no good in this lively, rhyming romp about actions and consequences.

This is Apple. He’s not a normal, nice kind of apple. Not a peaceful piece of fruit, no siree. He’s rotten to the core.

In this irreverent new book by award-winning author Huw Lewis Jones, a truly terrible piece of fruit is wreaking havoc far beyond the rim of the fruit bowl. Bad Apple is dead set on making life miserable for Pear, Plum, Cat, and Spoon, and it seems like no one will stop him. He pinches, steals, and breaks his way through the kitchen—until he encounters Snake. Could Snake be a match for the most mischievous snack in the house?

Illustrated in a deadpan, painterly style by Ben Sanders, Bad Apple is sure to entertain the entire family.

Huw Lewis Jones is a historian of exploration who travels in the Arctic and Antarctica each year as a polar guide. He was formerly a curator at the Scott Polar Research Institute, Cambridge, and the National Maritime Museum, London. His books include The Writer’s Map: An Atlas of Imaginary Lands, Explorers’ Sketchbooks: The Art of Discovery & Adventure, and The Sea Journal: Seafarers’ Sketchbooks.

Ben Sanders is an Australian illustrator and graphic designer based in Melbourne. He is the author and illustrator of My Book (Not Yours), I Could Wear That Hat!, and I’ve an Uncle Ivan. His clients include Monocle, The Wall Street Journal, Visa, and Cadbury, among others.