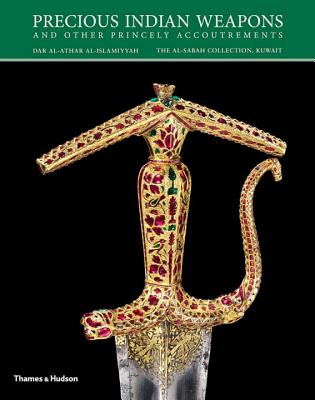 And Other Princely Accoutrements

This spectacular collection of nearly 200 jeweled weapons and priceless accoutrements from the Indian subcontinent was assembled over many decades by Sheikh Nasser and Sheikha Hussah al-Sabah for The al-Sabah Collection, Kuwait. Produced for aristocratic patrons who valued the arts, these richly decorated edged weapons and other princely objects bear witness to the legendary opulence and refinement of the Indian courts during the sixteenth to the nineteenth centuries. Many incorporate decorative features originating in Central Asia, the Iranian world, China, and even Renaissance Europe, testifying to centuries of trade, travel, and warfare. At the same time, the ornate and uniquely Indian weapons are masterpieces of a long and unparalleled tradition of artistic craftsmanship on the subcontinent.

The ninth in Thames & Hudson’s acclaimed series with The al-Sabah Collection, Precious Indian Weapons is divided into fourteen chapters that explore the intricacies and details of hilts, knives, swords, and various other weapons. Rendered in silver, gold, and gems, the dazzling array of decorative motifs presented here includes intricate floral, geometric, and animal designs that testify both to the astonishing skill of their craftsmen and to the area’s complex interconnected cultural histories.