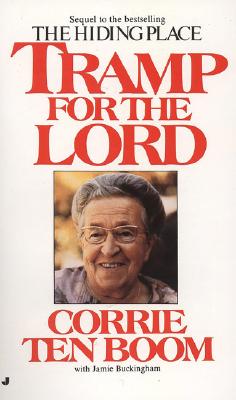 Tramp for the Lord

In 1940, Corrie ten Boom was living with her father and sister above their watch shop in Haarlem when their country was invaded. Armed with the gift of their faith and their belief in doing what was right, this devoutly Christian family provided sanctuary for persecuted Jews. Before long, the Nazis captured Corrie and her family and sent them to a concentration camp, where Corrie lost both her sister and father.

But remarkably, throughout this turbulent time, from her near-destitute days in postwar New York to her heart-stopping adventures in Africa, Corrie sustained the faith in God that helped her become one of the most beloved evangelists of her time.

“Although the threads of my life have often seemed knotted, I know, by faith, that on the other side of the embroidery there is a crown. As I have walked the world—a tramp for the Lord—I have learned a few lessons in God’s great classroom.”

Corrie ten Boom was a Dutch watchmaker and writer who, along with her family, was imprisoned for helping numerous Jews escape the Nazi Holocaust during World War II. She was knighted by the queen of the Netherlands in recognition of her efforts and was named Righteous Among the Nations by Israel. Her bestselling book The Hiding Place recalls her ordeal. She died in 1983.
Loading...
or support indie stores by buying on