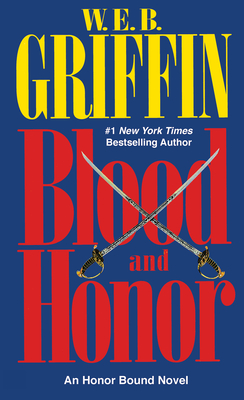 As did his three immensely popular series Brotherhood of War, The Corps and Badge of Honor, W.E.B. Griffin's novel of World War II espionage Honor Bound became an immediate bestseller: "A superior war story" (Library Journal) "whose twists and turns keep readers guessing until the last page" (Publishers Weekly). Now the characters of Honor Bound are back, in an adventure as exciting as anything Griffin has written. It is April 1943, and Marine aviator Cletus Frade, Army demolition's wizard Anthony Pelosi, and communications expert David Ettinger are thrust again into the lethal nest of intrigue that is wartime Buenos Aires. A clandestine German vessel sets sail to resupply submarines in the South Atlantic...as a massive shipment of money earmarked for postwar Reich makes its way to South America...and a coup designed to topple the government reaches critical mass. In the midst of it all, the German-ordered assassination of Cletus Frade's father demands only one response: revenge. Threading their way carefully between Axis and Allied sympathizers, and even between rival OSS and FBI factions, the three solidiers must strive their utmost not only to fulfill their missions--but just to stay alive. And for that, even their utmost may not be enough... Written with all the energy and expertise that Griffin's readers have come to expect, filled with drama and authentic heroes, Blood and Honor is a captivating novel sure to please fans old and new.