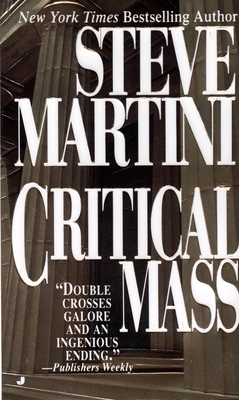 Jocelyn "Joss" Cole, a burned-out public defender from L.A., has opted for a quieter life in the San Juan Islands of Washington State. Joss has no significant clients other than a group of commercial fisherman suffering from a strange and serious illness, a condition that doctors cannot diagnose, and which Joss believes has an industrial cause. Then into her office comes Dean Belden, a well-heeled client in search of a lawyer to help him set up a business in the islands. Within days Belden is subpoenaed to appear before a federal grand jury. Less than an hour after testifying, and before Joss can discover what happened in the secrecy of the grand jury room, Belden dies in a fiery explosion of his float plane on Seattle's Lake Union. Gideon Van Ry is a nuclear fission expert and a scholar in residence at the Center for Nonproliferation Studies in Monterey, California. One of his duties is to update the Center's database, an extensive catalog listing fissionable materials and weapons of mass destruction. Gideon is troubled by the apparent failure to account for two small tactical nuclear devices missing from a storage facility in the former Soviet Union.The two weapons were last seen in packing crates, to be shipped to an American company called Belden Electronics. Gideon has been unable to locate this firm, and now he is left with only one possible lead, the lawyer who incorporated the company-Jocelyn Cole. Fraught with tension and suspense, Critical Mass is Steve Martini at his electrifying best. It is the story of what can happen in a world where private hate and public apathy combine to uncork the sleeping but deadly genie of nuclear terror.

Steve Martini worked as a newspaper reporter in Los Angeles and as a capital correspondent at the state house in Sacramento, California. An honors graduate at the University of California at Santa Cruz, Mr. Martini holds his law degree from the University of the Pacific’s McGeorge School of Law. He has written widely on the law and politics, having covered both state and federal courts, the state legislature, and the administrations of governors Ronald Reagan and Jerry Brown. In 1984 Martini turned his talents to fiction, quickly earning positions on bestseller lists and garnering both critical and popular praise for his New York Times–bestselling novels, including The Simeon Chamber, Compelling Evidence, Prime Witness, Undue Influence, The Judge, The List, Critical Mass, The Attorney, The Jury, and The Arraignment. Mr. Martini lives on the West Coast.
Loading...
or support indie stores by buying on
(This book is on backorder)