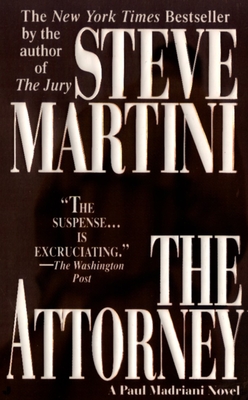 The Attorney (A Paul Madriani Novel #5)

“Legal thrillers don't get much better than this,” wrote Publishers Weekly in praise of The Judge. Kirkus Reviews hailed Undue Influence as “the courtroom novel of the year.” Now Martini delivers one of Paul Madriani’s most challenging cases in The Attorney: where a drug-addicted mother is pitted against her daughter’s newly rich grandfather in a contentious custody case that leads to criminal accusations—and ultimately murder...

Praise For The Attorney (A Paul Madriani Novel #5)…

Praise for The Attorney

“A tight plot where all of the elements dovetail at the end...twists and turns...The suspense here is excruciating.”—The Washington Post

“Plenty of zigs and zags in the plotting make this another strong outing for Martini.”—Chicago Tribune

Steve Martini worked as a newspaper reporter in Los Angeles and as a capital correspondent at the state house in Sacramento, California. An honors graduate at the University of California at Santa Cruz, Mr. Martini holds his law degree from the University of the Pacific’s McGeorge School of Law. He has written widely on the law and politics, having covered both state and federal courts, the state legislature, and the administrations of governors Ronald Reagan and Jerry Brown. In 1984 Martini turned his talents to fiction, quickly earning positions on bestseller lists and garnering both critical and popular praise for his New York Times–bestselling novels, including The Simeon Chamber, Compelling Evidence, Prime Witness, Undue Influence, The Judge, The List, Critical Mass, The Attorney, The Jury, and The Arraignment. Mr. Martini lives on the West Coast.
Loading...
or
Not Currently Available for Direct Purchase