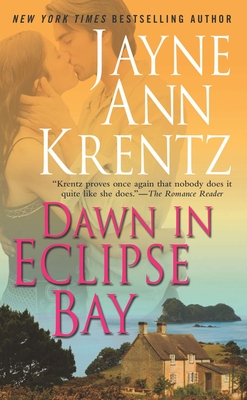 From New York Times bestselling author Jayne Ann Krentz comes the second novel in a dramatic trilogy set in breathtaking Eclipse Bay, a town filled with rivalries as fierce and compelling as the rugged Oregon coast...

Nothing was ever simple between a Madison and a Harte. The feud that had divided their families still simmered. Now, only months after their siblings’ wedding, Lilian Harte and Gabe Madison are at each other’s throats.

Successful CEO Gabe had insisted on becoming a client of Lilian’s matchmaking service. And after five disastrous dates, Lilian is at her wit’s end. If she hadn’t already decided to close her business and move home to Eclipse Bay, Gabe would have been the final straw. But when she finds Gabe at her door demanding she fulfill their business contract, the sparks between them suddenly turn personal. Once again, Eclipse Bay will witness a showdown—between a relentless Madison and an irresistible Harte...


Praise For Dawn in Eclipse Bay…

“Jayne Ann Krentz is a woman who knows her way around a thrilling plot...[She] knows how to ignite the sparks in a relationship and she also knows how to create suspenseful situations.”—The Huffington Post

“You can count on Krentz to deliver a good story with twists and turns and memorable characters.”—The News-Gazette

“There’s a reason Jayne Ann Krentz sells so many books...[She] continues toexhibit a fine knack for entertaining her readers.”—Fort Worth Star-Telegram

“A master of romantic mystery and suspense novels.”—The Columbus Dispatch

“Romantic suspense and Krentz are an unbeatable duo.”—RT Book Reviews