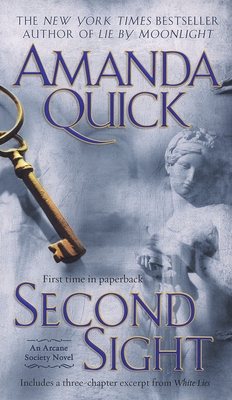 New York Times bestselling author Amanda Quick invites you to experience a thrilling adventure filled with the lure of ancient secrets and the simmering passions of the Victorian age in the first Arcane Society novel.

Venetia Milton’s memories of a romantic night with Gabriel Jones—an alchemist’s descendant—are shattered soon thereafter by news of his death. Adopting the guise of his respectable widow, she embarks on a new career as a fashionable photographer in London, where her unique ability to “see” beyond her subjects makes her photographs highly prized.

But Venetia’s romantic whim causes unexpected trouble. For one thing, Mr. Jones is about to stride, living and breathing, back into her life. And someone he is tracking will go to any lengths, even murder, to possess an ancient, extraordinary secret that has been lost for centuries. Someone who believes that as the “wife” of Mr. Jones, Venetia is the key...

“It doesn’t take ‘psychical abilities’ to see this one’s a winner...Second Sight is the opening book in the ‘Arcane Society’ series, and if it’s any indication of what’s to come, the series may be one of Quick’s best.”—The State (Columbia, SC)