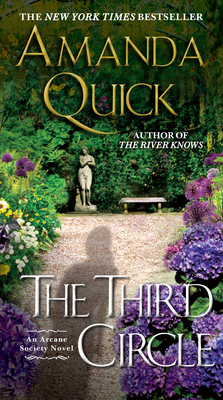 Attempting to recover a relic stolen from her family years ago, gifted crystal worker Leona Hewitt secretly makes her way into Lord Delbridge’s private museum. But who she finds there is more entrancing than the crystal she seeks.

Thaddeus Ware is a mesmerist with powerful psychic energy—that doesn’t seem to be affecting the woman before him. Instead, Leona seems to exert a rather hypnotic power over the hypnotist himself. After she gives him the slip, absconding with the crystal they recovered, Thaddeus fears for her safety. For he is on assignment for the secretive Arcane Society and knows that the crystal holds the potential for great destruction. It is the key to Lord Delbridge’s membership in a shadowy group known as the Third Circle. The nobleman killed before to acquire the crystal, and Thaddeus has no doubt that he will kill again.

Praise For The Third Circle (An Arcane Society Novel #4)…

Praise for The Third Circle

“Quick deftly distills intrigue, romance and a dash of the paranormal into a beguiling story.”—Chicago Tribune

“Mystery, danger and the otherworldly come together in this compelling read.”—BookPage

“Compelling...It’s just another example of why you can’t go wrong with a Jayne Ann Krentz-written book—no matter what name she uses.”—The State (Columbia, SC)

“This fast-paced story resolves itself quite satisfactorily while adding to the ongoing story of the society.”—Library Journal

“The Third Circle is Amanda Quick at her mesmerizing best with an enchanting historical romantic suspense that contains a rousing romp, an intriguing mystery, and a touch of the fantasy that come together nicely in a cleverly crafted story line.”—Midwest Book Review

“Quick has a knack for finding unique characters, and this book is no exception. The Arcane Society has inspired her to explore new avenues, and the readers reap the benefits. There is plenty of action, suspense, and just enough romance to keep the pages turning to the very last.”—A Romance Review