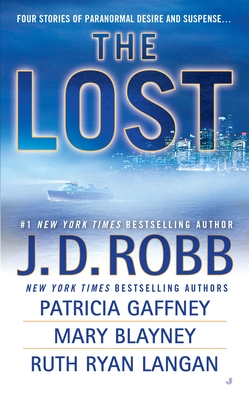 Featuring an In Death story from #1 New York Times bestselling author J. D. Robb, this thrilling anthology ventures into a world where the rules of love, time, and place can be forever lost...

In J. D. Robb’s "Missing in Death," Detective Eve Dallas investigates a female tourist’s disappearance during a ferry ride and starts to wonder…if she didn’t jump, and she’s not on board, then where in the world is she?

In Patricia Gaffney’s "The Dog Days of Laurie Summer," a woman awakens after a severe accident to find a world as familiar as it is unsettling.

In Mary Blayney’s "Lost in Paradise," a man locked in an island fortress finds hope for freedom in an enigmatic nurse.

And Ruth Ryan Langan’s "Legacy" belongs to a young woman who unearths a family secret buried on the grounds of a magnificent but imposing Irish castle.

Praise For The Lost…