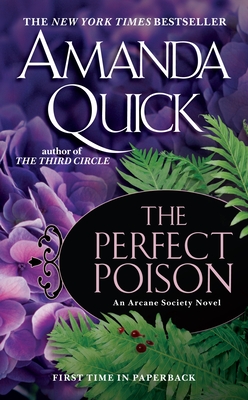 In this suspenseful Arcane Society novel, New York Times bestselling author Amanda Quick delves into the underworld of passion, greed and powers that lie beyond this realm.

Victorian botanist Lucinda Bromley has a rare talent: the ability to detect almost any type of poison. She also tends many rare plants, including a species of fern that was stolen from her conservatory just last month—and which turns up in a poison that was used in a nobleman’s murder.

To keep her name out of the investigation and to find the killer, Lucinda hires a fellow Arcane Society member. The founder of a psychical investigation agency, Caleb Jones is very good at protecting the Society’s secrets—and frighteningly good at getting the truth.

As a nearly overwhelming desire blooms between Caleb and Lucinda, they are drawn into the dark heart of a deadly conspiracy—and into a legacy of madness that could plunge Caleb into the depths of his own tortured soul...

Praise For The Perfect Poison (An Arcane Society Novel #6)…

Praise for The Perfect Poison

“An exhilarating historical romantic suspense that is filled with a strong cast, terrific twisting plots and a sense of time running out that grips the audience with a need to know the outcome in one sitting...a great Victorian sleuthing duet.”—Midwest Book Review
or
Buy Here
Copyright © 2020 American Booksellers Association