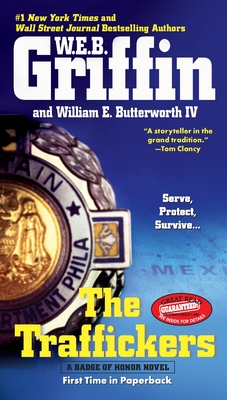 The Traffickers (Badge Of Honor #9)

Philadelphia Homicide Sergeant Matthew Payne is paired with a Texas Ranger to bring down a murderer with Mexican cartel connections. The odd couple of the Philly cop and the Texas lawman must run down the killer and his gang-before the body count rises again.

William E. Butterworth IV has been a writer and editor for major newspapers and magazines for more than twenty-five years, and has worked closely with his father for several years on the editing of the Griffin books. He is the coauthor of several novels in the Badge of Honor, Men at War, Honor Bound, and Presidential Agent series. He lives in St. Petersburg, Florida.
Loading...
or support indie stores by buying on