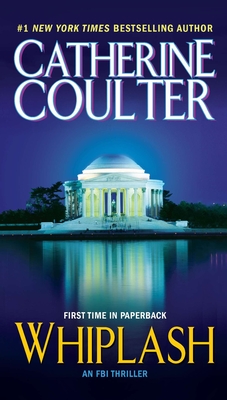 In Connecticut, the murder of a pharmaceutical bigwig brings in Savich and Sherlock, along with local Agent Bowie Richards and P.I. Erin Pulaski. Back in Washington, an important U.S. senator is terrorized by an unknown entity, and is calling for Savich’s special skills.

When the Vice President is nearly killed, it’s clear these crimes are linked—and Savich and Sherlock must act fast to stop a killer...

Praise For Whiplash (An FBI Thriller #14)…

Praise for the FBI Series

“As always with Coulter, the story is fast-paced with new characters joining in to bring more danger, thrills, and romance to the world. And with an ending you will not believe, the reader will also be given a clear look as to who the next ‘handsome’ agent will be taking center spotlight.”—Suspense Magazine

“Captivating...Coulter expertly jacks up the suspense as she alternates between the two plotlines.”—Publishers Weekly on Bombshell

“...this thriller will send chills up your spine.”—Newark Star-Ledger on Whiplash