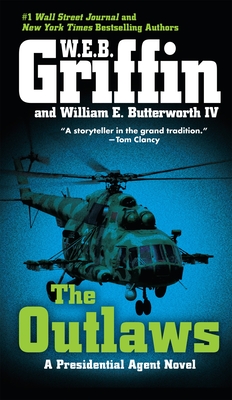 The former Presidential Agent’s Office of Organizational Analysis has been disbanded. Charley Castillo and his colleagues have retired, and the sudden death of the President has brought an adversarial Commander-in-Chief into the Oval Office...

But just because Castillo is out of the government doesn’t mean he’s out of business. He still has the skills and the manpower to do what others can’t or won’t do. And his first job is a real killer. A barrel filled with some nightmarishly lethal biohazard material has been shipped to an Army medical lab—material that Castillo and his men were supposed to have destroyed on a mission. Clearly, the message is that more of the deadly material remains.

But who has it? And what do they want? With lives at stake—including his own—Castillo knows that he’s not going to like the answers one damn bit...

Praise For The Outlaws…

“A writer of true virtuosity and talent.”—Fort Worth Star-Telegram

“Griffin…understands the psychology and motivations of military and clandestine service officers.”—Publishers Weekly