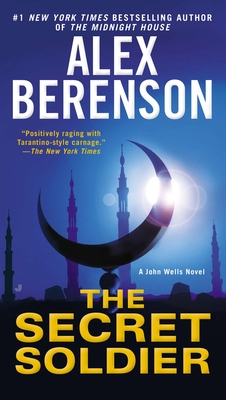 In Saudi Arabia, a series of terrorist attacks has put the Kingdom on edge. King Abdullah is losing his hold, and his own secret police cannot be trusted. With nowhere to turn, the king asks for ex-CIA agent John Wells's help.

Reluctantly, and with the secret blessing of his former CIA boss, Wells begins to unravel the conspiracy, and realizes that there is more than one country at stake-because the plotters want more than the fall of a monarch. They want to start the final battle between America and Islam-with only themselves as the victors...


Praise For The Secret Soldier (A John Wells Novel #5)…

“Wells is a fine character who will likely propel Berenson’s thrillers to success for some time to come.”—Chicago Sun-Times

“Top-flight…The authenticity Berenson brings to his ripped-from-the-headlines stories makes them seem as vividly real and scary as nonfiction or the nightly news.”—Booklist

“Wells is a refreshing thriller hero, sort of the anti-Jack Bauer.”—The Houston Chronicle

As a reporter for The New York Times, Alex Berenson has covered topics ranging from the occupation of Iraq to the flooding of New Orleans to the financial crimes of Bernie Madoff. His previous novels include The Faithful Spy, winner of the 2007 Edgar Award, and The Ghost War. He lives in New York City.
Loading...
or
Not Currently Available for Direct Purchase