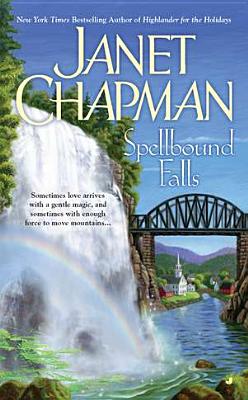 Maximilian Oceanus arrives in Spellbound Falls just in time to save Olivia Baldwin from an overly aggressive suitor, only to find himself attracted to the beautiful, if rather aloof, widow. And although Mac has come to Inglenook to get a handle on fatherhood, his newly discovered six-year-old son has set his sights on finding his father a wife.

Olivia, however, is busy getting Inglenook ready for its new season, so she doesn’t have time to deal with her growing attraction to the dangerously seductive Mac. Besides, weird stuff seems to happen all around him. Take the fact that her seatbelt keeps getting stuck in his presence, or locks magically open for him without keys, and that he seems to have a talent for sensing things. Never mind the three lost albatrosses walking down the road in the middle of the night. Since when are there albatrosses in Maine?

But despite Olivia’s resistance to falling under the sexy man’s spell, Olivia is having trouble fighting her longing. Because she knows Mac is just the man to unlock the powerful passion deep within her….

Janet Chapman is the author of nineteen contemporary and paranormal romance novels, all set in the state of Maine, where she lives with her husband surrounded by wildlife. Best known for her magical Highlander Series (a family saga of 12th-century warriors rebuilding their clans in modern-day Maine), Janet also has several contemporary series set on the coast and in the mountains. With over three million books printed in six languages, her stories regularly appear on the New York Times and the USA Today bestseller lists. When she’s not writing, Janet and her husband are camping, hunting, fishing, and generally rubbing elbows with nature. Visit her website at www.janetchapman.com
or
Buy Here
Copyright © 2020 American Booksellers Association