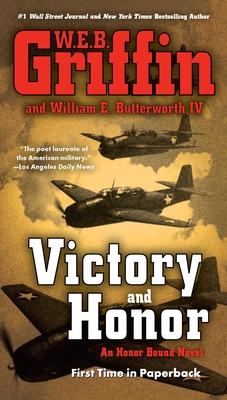 W.E. B. Griffin returns to his Honor Bound series set in the shadows of World War II espionage in South America…

May 1945: Just weeks after Hitler’s suicide, Cletus Frade and his colleagues in the Office of Strategic Services are fighting several new and deadly battles. The first is political—with every department from Treasury to War to the FBI grabbing for OSS covert agents and assets. The second is military—with the OSS having smuggled Germans into Argentina for years because of their knowledge of Soviet KGB agents in America’s atomic bomb program. The third concerns what might be the next world war against Red Joe Stalin and his voracious ambitions.

To get an early advantage, Frade has been conducting a secret and daring operation against the Communists. But to do it undetected, he and his men must walk a perilously dark line. Because all it takes is one slip—and everyone becomes a casualty of war.

Praise For Victory and Honor…

“The poet laureate of the American military.”

“A storyteller in the grand tradition.”

“Techno-thriller fans will relish the detailed descriptions of weapons and aircraft.”

“W.E.B. Griffin is the best chronicler of the U.S. military ever to put pen to paper—and rates among the best storytellers in any genre.”

William E. Butterworth IV has been a writer and editor for major newspapers and magazines for twenty-five years, and has worked closely with his father for several years on the editing of the Griffin books. He lives in Texas.
Loading...
or
Not Currently Available for Direct Purchase