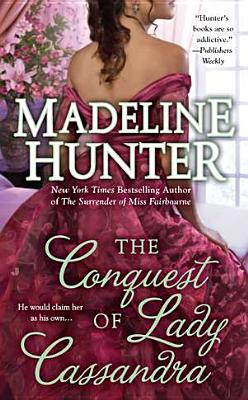 HER PRIDE.
HIS PREJUDICE.
THEIR PASSION.

As headstrong as she is beautiful, Lady Cassandra Vernham defied convention when she refused to marry the man who had compromised her. Now, estranged from her family, Cassandra struggles to make ends meet. A recent auction of her jewels has brought her a modicum of relief, but one of the most valuable lots was never paid for by the highest bidder: handsome, rakish Viscount Ambury. Cassandra needs that money badly, and not to buy a new hat.

As the seductive lord and the scandalous beauty are drawn together, the passion that flares between them will illuminate shocking secrets that will change both their lives forever…

Praise For The Conquest of Lady Cassandra (Fairbourne Quartet #2)…

Praise for The Conquest of Lady Cassandra:

"RITA Award–winning Hunter follows The Surrender of Miss Fairborne (2012) with another stellar Regency-set historical romance that hits all the literary marks. Hunter’s effortlessly elegant writing exudes a wicked sense of wit; her characterization is superbly subtle, and the sexual chemistry she cooks up between her deliciously independent heroine and delightfully sexy hero is pure passion." --Booklist (starred review)

"Intelligent and memorable... [The Conquest of Lady Cassandra] is as smart and sharp as the best of Regency romances can be.  With its tangy dialogue, Pride and Prejudice themes, bits of mystery and nefarious characters, readers may be reminded of Jane Austen." --Romantic Times (Top Pick)

Praise for the novels of Madeline Hunter:
“Hunter’s books are so addictive.”—Publishers Weekly
"Richly spiced with wicked wit and masterfully threaded with danger and desire, the superbly sexy first book in Hunter’s new Regency historical quartet is irresistible and wonderfully entertaining."—Booklist (starred review)
“Hunter's flowery centerpiece will suit every romance table. Highly recommended.”—Library Journal
“Hunter gifts readers with a fantastic story that reaches into the heart of relationships and allows her to deliver a deep-sigh read.”—RT Book Reviews

Madeline Hunter has published twenty-two critically acclaimed historical romances. Her books regularly appear on the New York Times and USA Today bestseller lists. More than five million copies of her books are in print, and her books have been translated into twelve languages. She has won two RITA Awards and is a seven-time RITA finalist. Madeline holds a PhD in art history, which she teaches at the university level.
Loading...
or
Not Currently Available for Direct Purchase