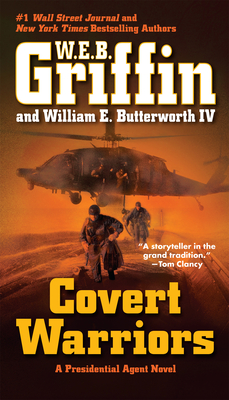 Charley Castillo and the former members of Presidential Agent’s Office of Organizational Analysis are officially “retired.” But that doesn’t mean they’re out of action…

At a Mexican roadblock, a US Embassy SUV is stopped at gunpoint, three of its passengers murdered, and a fourth kidnapped. Everything points to the drug cartels, especially when the kidnappers say they will return the hostage if a cartel kingpin is released from US federal prison. But when word gets to Castillo and his group of retired spies and special operators, they have their doubts.

They believe that it's a diversion—that the murders and kidnapping were ordered by someone to lure Castillo & Company to their deaths. But even knowing that may not save them. Powerful forces in the US government are arrayed against them as well, and if one side doesn't get them...the other side will.

“A writer of true virtuosity and talent.”—Fort Worth Star-Telegram

“Griffin…understands the psychology and motivations of military and clandestine service officers.”—Publishers Weekly

William E. Butterworth IV has been an editor and a writer for more than twenty-five years, and has worked closely with his father for a decade on the editing of the Griffin books. He is the coauthor of nine Griffin novels in the bestselling Presidential Agent, Honor Bound, Badge of Honor, and Men at War series. He is a member of the Sons of the American Legion China Post #1 in Exile, the Office of Strategic Services (OSS) Society, and life member of the National Rifle Association and the Texas Rifle Association.
Loading...
or
Not Currently Available for Direct Purchase