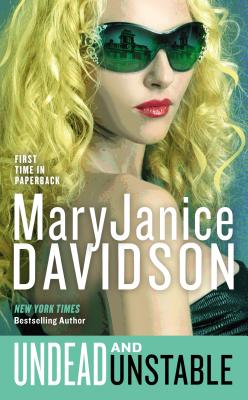 A death and life situation…

Betsy’s heartbroken over her friend Marc’s death, but at least his sacrifice should change the future—her future­—for the better. But Betsy’s next few hundred years will still be far from perfect. After all, her half sister Laura is the Antichrist and Laura’s mother is Satan, which means that family gatherings will always be more than a little awkward.

What’s really bothering Betsy is that ever since she and Laura returned from visiting their mom in hell, Laura’s been acting increasingly peculiar. Maybe it’s Laura’s new job offer as Satan’s replacement down under. Unfortunately, the position comes at a damnable price: her soul. Now a war has been waged—one that’s going to take sibling rivalry to a whole new level and a dimension where only one sister can survive.

Praise For Undead and Unstable: A Queen Betsy Novel…

Praise for the novels of MaryJanice Davidson

“Ms. Davidson has her own brand of wit and shocking surprises that make her vampire series one of a kind.”—Darque Reviews

“Think Sex and the City—only the city is Minneapolis and it’s filled with demons and vampires.”—Publishers Weekly

MaryJanice Davidson is the New York Times bestselling author of several books, most recently Undead and Undermined, Undead and Unfinished, Undead and Unwelcome, Undead and Unworthy, and Dead Over Heels. With her husband, Anthony Alongi, she also writes a series featuring a teen weredragon named Jennifer Scales.
Loading...
or support indie stores by buying on
(This book is on backorder)