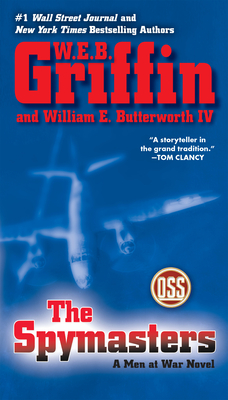 The Spymasters (Men at War #7)

Summer 1943. Two of the Allies’ most important plans for winning World War II are at grave risk—the coming D-Day invasion and the Manhattan Project’s race to build the atomic bomb.

OSS spy chief William “Wild Bill” Donovan turns to his top agent, Dick Canidy, and his team. They’ve certainly got their work cut out for them. In the weeks to come, they must fight not only the enemy in the field—and figure out how to sabotage Germany’s new “aerial torpedo” rockets—but also the enemy within.

Someone is feeding Manhattan Project secrets to the Soviets. And if the Soviets build their own atomic bomb, winning the war might only lead to another, even more terrible conflict…

Praise For The Spymasters (Men at War #7)…

“You can almost taste the gin and tonic as FDR and OSS chief William ‘Wild Bill’ Donovan meet on the presidential yacht Sequoia to discuss plans for winning the war.”—Publishers Weekly

William E. Butterworth IV has been an editor and writer for more than twenty-five years, and has worked closely with his father for almost a decade on the editing and writing of the Griffin books. He is coauthor of the bestselling novels The Saboteurs, The Double Agents, Death and Honor, The Traffickers, The Honor of Spies, The Vigilantes, The Outlaws, Victory and Honor, and Covert Warriors. He is a member of the Sons of the American Legion, China Post #1 in Exile; the Office of Strategic Services (OSS) Society; and a life member of the National Rifle Association and the Texas Rifle Association. He lives in Texas.
Loading...
or
Not Currently Available for Direct Purchase