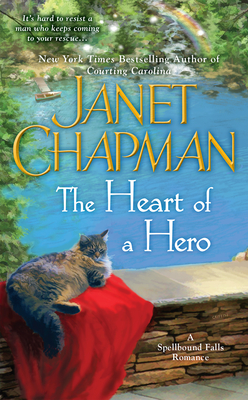 The Heart of a Hero (A Spellbound Falls Romance #4)

New York Times bestselling author Janet Chapman welcomes her fans back to Spellbound Falls, where no one is immune to the magical powers of love…

Originally from the ancient mythical island of Atlantis, Nicholas has spent the last year deep in the mountains of Maine, serving as Director of Security for the Nova Mare and Inglenook resorts. Fully embracing his life in the twenty-first century, he finds himself irresistibly drawn to a trouble-prone employee, and is determined to keep her safe.

The last thing Julia Campbell needs is a man with a hero complex, especially one as handsome and imposing as Nicholas. All she has to do is keep it together until her younger sister turns eighteen, and then she can focus on her own life. But strange things have been happening at the resort—and it’s Nicholas who keeps coming to her rescue. When Nicholas is suddenly the one in trouble, Julia realizes he’s not quite what he seems—and that she’ll do anything to help the man who’s stolen her heart…

"Chapman's engaging fourth Spellbound Falls novel...pairs up Nicholas, an Atlantean who's now director of security for the exquisite and magic-drenched Nova Mare resort, and Julia Campbell, a quiet, pretty housekeeper at the resort....Fans will find this a satisfying addition to the series." --Publishers Weekly
Praise for the novels of Janet Chapman
“Readers will be enchanted…a story filled with wit and tenderness.”—Booklist
“Heartwarming…Readers will enjoy the enchanting town and characters.”—Publishers Weekly
"Janet Chapman can turn the ordinary into the extraordinary while making even the most outrageous situation feel real. These are just two of the many, many reasons why we love this author. And her Spellbound Falls series, chock full of sorcerers, time travel, single parents and needy in-laws is the perfect vehicle for showcasing Chapman’s amazing talents." --Romantic Times
“Janet Chapman is a keeper.”—Linda Howard, New York Times bestselling author
“Spectacular and brilliant.”—Romance Reviews Today
“Absolutely enchanting.”—Romance Junkies

Janet Chapman is the author of twenty contemporary and paranormal romance novels, all set in the state of Maine, where she lives with her husband, surrounded by wildlife. Best known for her magical Highlander series (a family saga of twelfth-century warriors rebuilding their clans in modern-day Maine), Janet also has several contemporary series set on the coast and in the mountains. With more than three million books printed in six languages, her stories regularly appear on the New York Times and the USA Today bestseller lists.

When she’s not writing, Janet and her husband are camping, hunting, fishing, and generally rubbing elbows with nature.
or
Not Currently Available for Direct Purchase