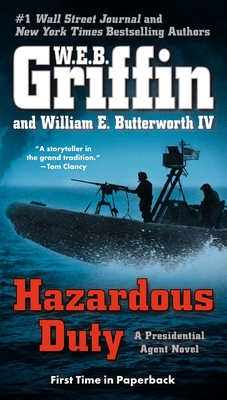 Colonel Charley Castillo is back in action..

Mexican drug cartels are shooting up the streets of Laredo and El Paso. Somali pirates are holding three U.S. tankers for ransom. Chaos reigns…
back in the fight.

The President has had enough—he needs to get hold of Colonel Charley Castillo and his merry band of fighters and put them on the case. Unfortunately, that might be impossible. Everybody knows that the President hates Castillo’s guts, having had him forcibly retired from the military. And Castillo’s men are scattered far and wide, many of them in hiding. There are also whispers that the President himself is becoming mentally unbalanced.

How will it all play out? No one knows for sure, but for Castillo and company, only one thing is definite: it will be hazardous duty.

“[Griffin] understands the psychology and motivations of military and clandestine service officers.”—Publishers Weekly

William E. Butterworth IV has been an editor and writer for more than twenty-five years, and has worked closely with his father for a decade on the editing and writing of the Griffin books. He is coauthor of the bestselling novels The Saboteurs, The Double Agents, Death and Honor, The Traffickers, The Honor of Spies, The Vigilantes, The Outlaws, Victory and Honor, Covert Warriors, The Spymasters, Empire and Honor, and The Last Witness. He is a member of the Sons of the American Legion, China Post #1 in Exile, and of the Office of Strategic Services (OSS) Society, and is a life member of the National Rifle Association and the Texas Rifle Association. He lives in Texas.
Loading...
or support indie stores by buying on
(This book is on backorder)