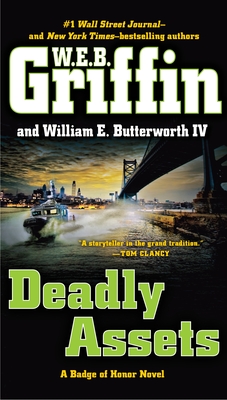 The dramatic New York Times–bestselling adventure in W. E. B. Griffin’s Badge of Honor series about the Philadelphia police force.

In Philadelphia—already suffering among the country’s worst murder rates—homicide is at an all-time high. With each violent crime, tension builds between the police department, the mayor’s office, and the Citizens Oversight Committee. The most vocal activist, reformed drug dealer Reverend Josiah Cross, places the blame, and with it a target, squarely on the back of twenty-seven-year-old homicide sergeant Matt Payne. Now Payne must navigate death threats and misdirected public outrage to follow a strange pattern of seemingly unrelated killings. If he can’t find his way through, it could spell an end to his reputation, his work—and maybe even his life.

“A very gripping, very well-researched look at a couple of days in Philly . . . Griffin and Butterworth have a real feel for rough neighborhoods that tourists never see.” —Connecticut News
“Gripping . . . Payne and his cohorts face long odds in a gritty police series that provides sociological comment but no easy answers.” —Publishers Weekly

Praise for Griffin and Butterworth

“Griffin has the knack. With enviable skill he doles out humanizing detail for a large and colorful cast, and you care what happens to virtually all of them. Griffin is one of those writers who sets his novel before you in short, fierce, stop-for-nothing scenes. Before you know it, you’ve gobbled it up.” —The Philadelphia Inquirer

“If God is truly in the details, then Griffin must be the pope of police procedurals. What’s amazing is that all these factoids don’t slow down the story’s considerable momentum for a minute. Nor do they keep Griffin’s gritty cops from convincing us of their individuality.” —Publishers Weekly

“Fans of Ed McBain’s 87th Precinct novels better make room on their shelves. . . . Badge of Honor is first and foremost the story of the people who solve the crimes. The characters come alive.” —The Gainesville Times

William E. Butterworth IV has been a writer and editor for major newspapers and magazines for more than twenty-five years, and has worked closely with his father for several years on the editing of the Griffin books. He is the coauthor of several novels in the Badge of Honor, Men at War, Honor Bound, Presidential Agent, and Clandestine Operations series. Butterworth lives in Saint Petersburg, Florida.
Loading...
or support indie stores by buying on