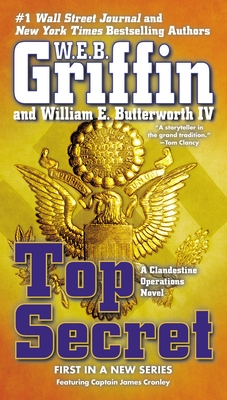 In the first weeks after World War II, James D. Cronley, Jr., is recruited for a new enterprise that will eventually be transformed into something called the CIA. For a new war has already begun against an enemy that is bigger, smarter, and more vicious: the Soviet Union.

The Soviets have hit the ground running, and Cronley’s job is to help frustrate them, harass them, and spy on them any way he can. But his first assignment might be his last. He’s got only seven days to extract a vital piece of information from a Soviet agent, and he’s already managed to rile up his superior officers. If he fails now, his intelligence career could be the shortest in history.

Because there are enemies everywhere—and, as Cronley is about to find out, some of them wear the same uniform he does...

“A thrilling new series...This incredible mix of intrigue, diplomacy and, of course, a bit of romance, is fantastic...Readers will be panting for the next novel.”—Suspense Magazine

“Those who are happy with lots of interesting period history, dry humor, and clever scheming will be amply rewarded.”—Publishers Weekly

William E. Butterworth IV has been an editor and writer for more than 25 years, and has worked closely with his father for over a decade on the editing and writing of the Griffin books. He is coauthor with him of more than a dozen New York Times bestselling novels. He is a member of the Sons of the American Legion, China Post #1 in Exile; the Office of Strategic Services (OSS) Society; and a life member of the National Rifle Association and the Texas Rifle Association. He lives in Florida.
Loading...
or
Not Currently Available for Direct Purchase