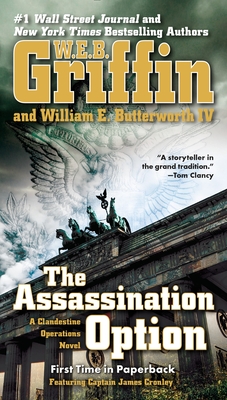 James Cronley’s first successful mission for the new Central Intelligence Directorate has drawn all kinds of attention, some welcome, some not, including from the Soviets, his own Pentagon, and a seething J. Edgar Hoover. Now complications have sprung  up all over, including a surprising alliance between the Germans and, of all things, the Mossad; and an unplanned meeting with an undercover agent against the Soviets known only as Seven K.. Cronley knows that if just one thing goes wrong, he’s likely to get thrown to the wolves. And he thinks he hears them howling now.

Praise For The Assassination Option (A Clandestine Operations Novel #2)…

“A Griffin adventure to bring out the Walter Mitty in every red-white-and-blue-blooded American male.” --Kirkus Reviews

“Engaging…It’s a testament to the authors’ skill and wide experience that the pages seem to turn themselves.” --Publishers Weekly

“The makings of an excellent series. The period between WWII and the Cold War offers raw material for several books, and as fans of Griffin’s body of work are well aware, he really sinks his teeth into politics and history.” --Booklist

Griffin is the author of seven bestselling series: The Corps, Brotherhood of War, Badge of Honor, Men at War, Honor Bound, Presidential Agent, and now Clandestine Operations. He lives in Fairhope, Alabama, and Buenos Aires, Argentina.

William E. Butterworth IV has been a writer and editor for major newspapers and magazines for over twenty-five years, and has worked closely with his father for several years on the editing of the Griffin books. He is the co-author of several novels in the Badge of Honor, Men at War, Honor Bound, and Presidential Agent series. He lives in St.Petersburg, Florida.
Loading...
or
Not Currently Available for Direct Purchase