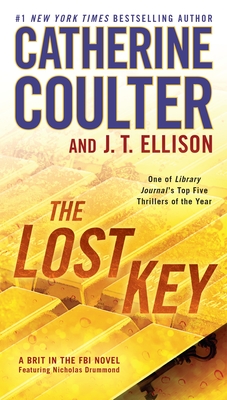 An international manhunt sets the scene for an explosive thriller in the second Brit in the FBI novel featuring Special Agent Nicholas Drummond.

After working with Special Agents Lacey Sherlock and Dillon Savich, Nicholas Drummond has joined the FBI. Now, he and partner Mike Caine are in an eleventh-hour race to stop a madman from finding a cache of lost World War I gold—and a weapon unlike anything the world has ever seen...

“A thriller packed with nonstop action, real-life name-dropping and enough cutting-edge science to make you wonder how much of it could be true.”—Kirkus Reviews

Praise for The Lost Key

“A thriller packed with nonstop action, real-life name-dropping and enough cutting-edge science to make you wonder how much of it could be true.”—Kirkus Reviews

“This engaging and suspenseful thriller will entertain readers with impossible nail-biting situations that are resolved by ingenious means....James Bond fans and readers who like heart-stopping action, cutting-edge science, and technology puzzles are bound to reserve this title.” —Library Journal (starred review)

“Action-packed...Readers will be terrified and on the edge of their seats throughout the book.”—Crimespree Magazine

“A fast-moving technothriller that proves the collaboration of Coulter and Ellison to be a serendipitous one.”—Booklist

“A thrill ride worthy of two such great writers.”—Suspense Magazine

J. T. Ellison is the bestselling author of twelve critically acclaimed novels, including What Lies Behind and When Shadows Fall, and her work has been published in more than twenty countries. Her novel The Cold Room won the ITW Thriller Award for Best Paperback Original and Where All the Dead Lie was a RITA® Nominee for Best Romantic Suspense. She is also coauthor of the Brit in the FBI series, including the New York Times bestsellers The End Game, The Lost Key, and The Final Cut.
Loading...
or
Not Currently Available for Direct Purchase