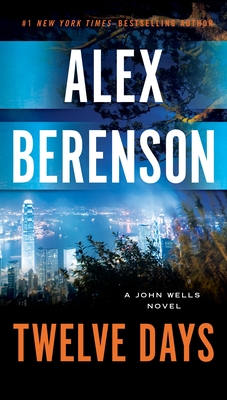 New York Times–bestselling author Alex Berenson is back with another gripping tale.

John Wells, with his former CIA bosses Ellis Shafer and Vinny Duto, have uncovered a staggering plot, a false-flag operation to drive the United States and Iran into war. But they have no proof and only twelve days to find a way to stop the headlong momentum. They fan out, from Switzerland to Saudi Arabia, Israel to Russia, desperately trying to tease out the clues in their possession. And meanwhile, the forces gather.

Praise for Twelve Days
“Lots of thriller writers know how to work a ticking clock, and lots more come to the genre with some experience in international politics, but few put the two together as effectively as Berenson does in this compelling, globe-trotting time bomb of a novel. Action fans will get all they came for . . . but those looking for genuine insight into the subtleties of the geopolitical chess game will be equally satisfied.” —Booklist (starred review)

“This well-written and fast-moving novel delivers more than a good plot. It illustrated how in the midst of regional chaos, a great power can jump to calamitous conclusions. This one is well worth the thriller enthusiast’s time, which holds true for all the novels Berenson has written to date.” —Kirkus Reviews (starred review)

“A fast-paced, enthralling fight to the finish . . . the sort of spy thriller that locks you in a fast and ferocious grip and won’t let you go.” —Associated Press

“An extremely suspenseful read that fans will not forget any time soon.” —Suspense Magazine

“All espionage thrillers should be this good. This is a series that you should—must—be reading.” —Bookreporter.com

This is Alex Berenson’s ninth novel featuring John Wells. As a reporter for The New York Times, Berenson covered topics ranging from the occupation of Iraq—where he was stationed for three months—to the flooding of New Orleans, to the world pharmaceutical industry, to the financial crimes of Bernard Madoff. He graduated from Yale University in 1994 with degrees in history and economics, and lives in New York City. The Faithful Spy won the 2007 Edgar Award for best first novel. He is also the author of The Wolves.
Loading...
or support indie stores by buying on