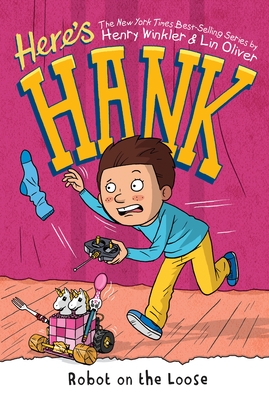 Hank, the star of the bestselling easy-to-read series, is back! This time, he has to learn the nuts and bolts of making a robot--and making a friend!

Hank's school is hosting its first-ever Build-a-Robot competition and Hank is ready to win. There's just one problem: he completely forgot about the contest! While other kids have been working on their robots for a month, Hank has just two days to create an amazing robot that will wow the judges and win him the trophy. To make matters worse, there might be another problem, too. Hank has no idea how to build a robot! With help from Jaden, a robot expert at his school, Hank and his friends construct their robot, Stanley, just in time. But on the day of the competition, Stanley malfunctions! It will take Hank, Frankie, Ashley, and their new friend Jaden to get it back on track. Forget winning the trophy--Hank has to stop a robot on the loose!

Henry Winkler is an acomplished actor, producer, and director. He is most well known for playing The Fonz on the American sitcom Happy Days. In 2003, Henry added author to his list of acheivements as he coauthored a series of children's books. Inspired by the true life experiences of Henry Winkler, whose undiagnosed dyslexia made him a classic childhood underachiever, the Hank Zipzer series is based on the high-spirited and funny adventures of a boy with learning differences. Henry is married to Stacey Weitzman and they have three children.

Lin Oliver is a children’s book author and writer/producer of numerous television series and movies for children. With Henry Winkler, she writes the New York Times bestselling book series, Hank Zipzer: World’s Best Underachiever, which has sold over 4 million copies and is a hit television series on the BBC. Their new chapter book series, Here’s Hank, is also a New York Times bestseller.  She is also the author of the Who Shrunk Daniel Funk quartet, Sound Bender and The Shadow Mask, adventure/science fiction middle grade novels she coauthored with Theo Baker. Her collection of poetry, the highly praised Little Poems for Tiny Ears, illustrated by Tomie dePaola, is being followed with another poetry collection, Steppin’ Out: Playful Rhymes for Toddler Times. Oliver is the cofounder and Executive Director of SCBWI.
Loading...
or support indie stores by buying on