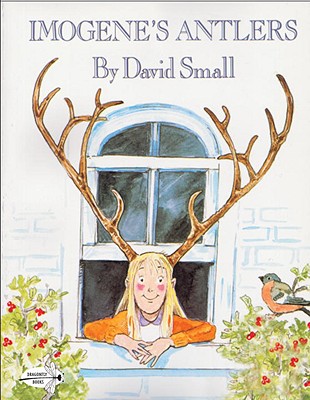 This whimsical story of a little girl who wakes one morning to discover she has grown antlers has delighted children since it was first published over 30 years ago!

The family doctor, the school principal, and even Imogene's know-it-all brother, Norman, fail to resolve her dilemma. Imogene, the cook, and the kitchen maid, however, make the best of things, finding unusual uses for Imogene's new horns. Meanwhile, the problem appears to be solved when Imogene awakes the next morning antler-free.But the family (and the reader) are in for a surprise when Imogene comes down to breakfast. . . .

"Small maximizes the inherent humor of the absurd situation. Hilarious, with a subtle lesson in acceptance."--(starred) School Library Journal.

"Young Imogene wakes up one morning to find she has sprouted antlers. Unflappable, Imogene takes the whole thing in stride; the same cannot be said for her mother, who faints every time her daughter comes into view....The effervescent, softly colored illustrations incorporate all the humor inherent in the tale. A laugh-aloud read-aloud."--Booklist

David Small grew up in Detroit, Michigan, studied art and English at Wayne State University, and completed his graduate studies in art at Yale University.

Although David always dreamed of being an artist, it was not until he was in his late thirties and had several works published that he began to say, proudly, I am an artist.

David and his wife, Sarah Stewart, now live in Mendon, Michigan, a town so small that you can whisper something on one side and be heard on the other.
Loading...
or
Not Currently Available for Direct Purchase