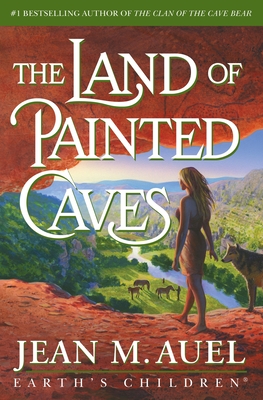 The Land of Painted Caves (Hardcover)

The highly anticipated sixth book of Jean Auel's Earth's Children® series, The Land of Painted Caves, is the culmination fans have been waiting for. Continuing the story of Ayla and Jondalar, Auel combines her brilliant narrative skills and appealing characters with a remarkable re-creation of the way life was lived more than 25,000 years ago. The Land of Painted Caves is an exquisite achievement by one of the world's most beloved authors.

Jean M. Auel is an international phenomenon. Her Earth's Children® series has sold more than 45 million copies worldwide and includes The Clan of the Cave Bear, The Valley of Horses, The Mammoth Hunters, The Plains of Passage, The Shelters of Stone, and The Land of Painted Caves. Her extensive research has earned her the respect of archaeologists and anthropologists around the world. She has honorary degrees from four universities and was honored by the French government's Ministry of Culture with the medal of an "Officer in the Order of Arts and Letters". She lives with her husband, Ray, in Oregon.


Praise For The Land of Painted Caves: A Novel (Earth's Children #6)…

“[T]here is real sweetness in the saga’s finale, when Ayla’s legacy to the world — both hers and ours — is made clear. Myriad things have changed in the last 30,000 years, but the endurance of human love is not one of them.”--Washington Post

“[Auel] does paint a convincing portrait of ancient life. And readers who fell in love with little Ayla will no doubt revel in her prehistoric womanhood.”--People

“As with her other books, Auel spins her tale with credible dialogue, believable situations and considerable drama. More than that, she deftly creates a whole world, giving a sense of the origins of class, ethnic and cultural differences that alternately divide and fascinate us today. Among modern epic spinners, Auel has few peers.”--Kirkus Reviews (starred)

“[T]he millions of readers who have been with Ayla from the start will want to once again lose themselves in the rich prehistoric world Auel conjures and see how this internationally beloved series concludes.”--Booklist

“[R]eaders who enjoyed the previous volumes will relish the opportunity to re-enter pre-history one last time.”--Publishers Weekly

"[T]he book is compelling and will be in high demand by Auel’s fans."--Library Journal
or
Buy Here
Copyright © 2020 American Booksellers Association