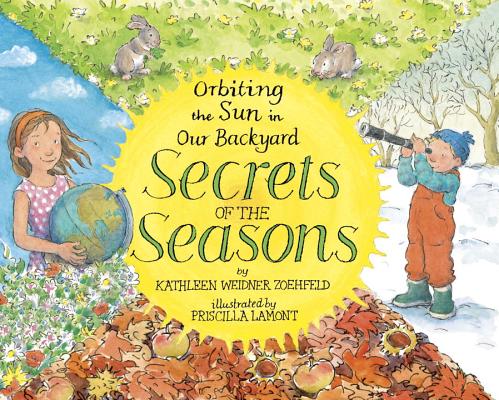 Secrets of the Seasons

Orbiting the Sun in Our Backyard

The family from Secrets of the Garden are back in a new book about backyard science that explains why the seasons change.

Alice and her friend Zack explore the reasons for the seasons. Alice's narrative is all about noticing the changes as fall turns into winter, spring, and then summer. She explains how the earth's yearlong journey around the sun, combined with the tilt in the earth's axis, makes the seasons happen.

Packed with sensory details, humor, and solid science, this book makes a complicated concept completely clear for young readers—and also for the many parents who struggle to answer their kids' questions!

"Several adults of my acquaintance . . . would find Secrets of the Seasons to be an eye-popping revelation." —John Lithgow, The New York Times Book Review

Praise For Secrets of the Seasons: Orbiting the Sun in Our Backyard…

The New York Times Book Review, May 9, 2014
"Several adults of my acquaintance . . . would find Secrets of the Seasons to be an eye-popping revelation." —John Lithgow

Publishers Weekly starred review, February 2, 2014
“Lamont’s detailed pen-and-watercolor illustrations help maintain the book’s blend of informative fun, while hinting at the vastness of the universe as seen through the portal of one’s own backyard.”

KATHLEEN WEIDNER ZOEHFELD was a children's book editor for more than 10 years before becoming a full-time writer. She has published more than 60 books for children, most about animals and natural history.

PRISCILLA LAMONT has illustrated dozens of books, including Secrets of the Garden: Food Chains and Food Webs in Our Backyard, also by Kathleen Zoehfeld. Whether drawing human or animal characters, Priscilla always likes to include some humor.
Loading...
or
Not Currently Available for Direct Purchase