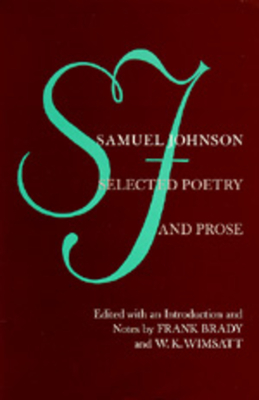 This is a major new selection of Samuel Johnson's best work, delightfully introduced by W. K. Wimsatt and scrupulously annotated by Frank Brady and Mr. Wimsatt.

Samuel Johnson, the only writer in English since the Renaissance to give his name to a literary period, was the center of English letters in his time. He was Dictionary Johnson, the lexicographer who had single-handedly settled the English language (it was hoped) on a firm basis; he was the author of a handful of fine poems, including two of the most remarkable satires of the century; he was a moralist whose Rambler and Idler essays, and novel-of-ideas Rasselas, provided a searching view of men and matters. And in his final years he produced his greatest work, that extraordinary combination of biography and criticism which came to be known as the Lives of the Poets.

This first extensive anthology of Johnson's writings to be published in many years emphasizes Johnson the writer. It responds to those aspects of Johnson's work of special interest to modern readers. It comprises a selection of Johnson's letters, all of his major poems (including London), Rasselas, twenty-one Rambler, nineteen Idlers, the Prefaces to the Dictionary and to the edition of Shakespeare, and the following Lives of the Poets: Cowley, Milton, Swift, Pope, Savage, Collins, and Gray.

All these works are extensively annotated and printed complete. Mr. Wimsatt, one of the outstanding Johnsonians of this century, provides in his Introduction a clear, connected biographical account of Johnson, stressing his writings. An up-to-date bibliography is also included. Johnson's varied accomplishments—as poet, as moralist, as biographer, as critic—are all amply represented.

Frank Brady is Professor of English at the City University of New York; the late W. K. Wimsatt was Sterling Professor of English at Yale. Both editors have worked on the Yale Editions of the Private Papers of James Boswell and are, by virtue of their extensive publication on Boswell and Johnson, among the leading scholars of this period.
Loading...
or support indie stores by buying on