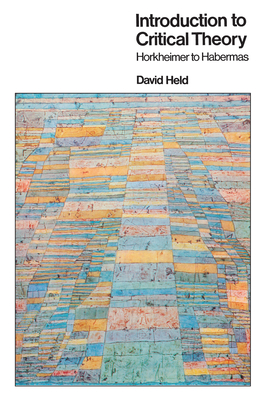 The writings of the critical theorists caught the imagination of students and intellectuals in the 1960s and 1970s. They became a key element in the formation and self-understanding of the New Left, and have been the subject of continuing controversy. Partly because of their rise to prominence during the political turmoil of the sixties, and partly because they draw on traditions rarely studied in the Anglo-American world, the works of these authors are often misunderstood.

In this book David Held provides a much-needed introduction to, and evaluation of, critical theory. He is concerned mainly with the thought of the Frankfurt school—Horkheimer, Adorno, Marcuse, in particular—and with Habermas, one of Europe's leading contemporary thinkers. Several of the major themes considered are critical theory's relation to Marx's critique of the political economy, Freudian psychoanalysis, aesthetics, and the philosophy of history. There is also a discussion of critical theory's substantive contribution to the analysis of capitalism, culture, the family, and the individual, as well as its contribution to epistemology and methodology.

Held's book will be necessary reading for all concerned with understanding and evaluating one of the most influential intellectual movements of our time.