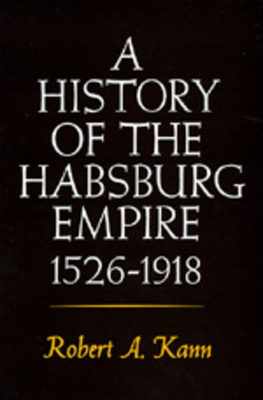 "An impressive achievement in a task of extraordinary difficulty...The outstanding asset of this work does not consist in in its comprehensiveness and objectivity, however, nor even in the wide knowledge and special expertise Kann can bring to bear from his early legal training, his formidable scholarship on the nationalities question, and his keen critical appreciation of the diverse cultures of the monarchy. Its greatest merit derives from the author's determination always to ask fundamental questions, his care to discriminate between surface phenomena and deeper causes, his skill in finding significant patterns in an apparently chaotic welter of events, his facility for perceptive and penetrating distinctions and generalizations. In short, he tried with considerable success to tell what really happened in history rather than simply what obviously happened."—Canadian Historical Review

"[Kann] has created an overview that is sweeping enough for undergraduate students and substantial enough for graduate students and their preceptors. His narrative reflects on dynastic, diplomatic, and martial policies and perturbations as well as cultural and social conditions and movements. His biographic essay will become a standard instrument."
— CHOICE

"Goes beyond the traditional Vienne-centered narrative narrative of the fortunes of the Habsburg family and gives us a history of the numerous people who lived under the scepter of this historic ruling house. . . . Will serve as a basic history and reference for many years to come."
— American Historical Review

"The most striking and novel feature of this book is its attempt to survey the Habsburg Empire as a multinational entity. . . . The institutions, internal divisions, and cultural achievements of each group are expounded and related to those of other groups. This staggering achievement marks a worthy capstone to Professor Kann's career. . . . For any topic in the political and social history of Austria between 1526 and 1918, this ought to become the volume of first resort."
— Modern Austrian Literature

"Well-organized and based upon an extensive and, in many cases, exhaustive knowledge of sources . . . a useful addition to the literature in English on the Habsburg monarchy; indeed, it is the most extensive account we have for the period covered."
— Slavic Review

"A book such as this is very welcome and will no doubt be read by many thousands of students."
— Slavonic and East European Review