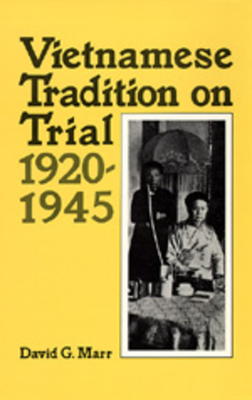 Despite the historical importance of the Vietnam War, we know very little about what the Vietnamese people thought and felt prior to the conflict. Americans have tended to treat Vietnam as an extension of their own hopes and fears, successes and failures, rather than addressing the Vietnamese record. In this volume, David Marr offers the first serious intellectual history of Vietnam, focusing on the period just prior to full-scale revolutionary upheaval and protracted military conflict. He argues that changes in political and social consciousness between 1920 and 1945 were a necessary precondition to the mass mobilization and people's war strategies employed subsequently against the French and the Americans. Thus he rejects the prevailing notion that Vietnamese success was primarily due to communist techniques of organization.

However, Vietnamese Tradition on Trial goes beyond simply accounting for anyone's victory or defeat to an informed description of intellectual currents in general. Replying for his information on a previously ignored corpus of books, pamphlets, periodicals, and leaflets, the author isolates eight issues of central concern to twentieth-century Vietnamese. The new intelligentsia—indubitably the product of a peculiar French colonial milieu, yet never divorced from the Vietnamese past and always looking to a brilliant Vietnamese future—spearheaded every debate beginning ini 1925.

After 1945, Vietnamese intellectuals either placed themselves under ruthless battlefield discipline or withdrew to private meditation. David Marr suggests that the new problems facing Vietnamese today make both of these approaches anachronistic. Whether the Vietnam Communist Party will allow citizens to subject received wisdom to critical debate, to formulate new explanations of reality, to test those explanations in practice, is the essential question lingering at the end of this study.

David G. Marr is a Fellow of the Research School of Pacific Studies, Australian National University.
Loading...
or support indie stores by buying on