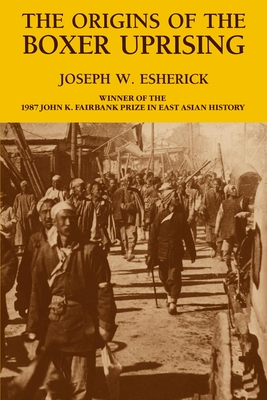 The Origins of the Boxer Uprising

In the summer of 1900, bands of peasant youths from the villages of north China streamed into Beijing to besiege the foreign legations, attracting the attention of the entire world. Joseph Esherick reconstructs the early history of the Boxers, challenging the traditional view that they grew from earlier anti-dynastic sects, and stressing instead the impact of social ecology and popular culture.

Praise For The Origins of the Boxer Uprising…

"One of the most stimulating scholarly works of the past decade in Chinese historical studies. It sets high standards of research, analysis and interpretation. Moreover, it will remain for many years not only the standard work on the first part of the Boxer movement, but a model of careful, convincing yet dramatically revisionist history."
— American Historical Review

"With this outstanding volume, Joseph Esherick has repaired one of the most glaring omissions in the scholarly canon. . . . [A] solid and provocative inquiry into this critically important event."
— Journal of Asian History

"A superbly researched book. . . . Not only do we get the Chinese (and Boxer) side of the story for the first time, we also get a much more complex view of the relations between the foreign powers, the missionaries and the Chinese court during the last years of the 19th century."
— International History Review

"Joseph Esherick has succeeded . . . in both describing and analyzing the Boxer movement in a much more complete and satisfactory manner than anyone else."
— The Historian

"A fine example of Chinese provincial history as well as a timely attempt to rethink some of the issues underlying the 1911 revolution."
— History

"A challenging revisionist account which provides the most satisfactory insight into the nature of the Boxer phenomenon currently available in the West."
— Times Higher Education

Joseph W. Esherick is Emeritus Professor, History at University of California, San Diego. He is the author of Ancestral Leaves: A Family Journey through Chinese History (UC Press) and co-editor of Chinese Local Elites and Patterns of Dominance and The Chinese Cultural Revolution as History, among many books.
Loading...
or support indie stores by buying on