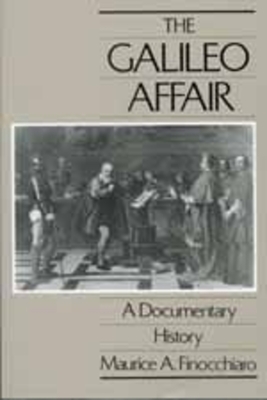 A Documentary History (California Studies in the History of Science #1)

By Maurice A. Finocchiaro (Editor)

In 1633 the Roman Inquisition concluded the trial of Galileo Galilei with a condemnation for heresy. The trial was itself the climax of a series of events which began two decades earlier (in 1613) and included another series of Inquisition proceedings in 1615-1616. Besides marking the end of the controversy that defines the original episode, the condemnation of 1633 also marks the beginning of another classic controversy-about the Galileo affair, its causes, its implications, and its lessons; about whether, for example, John Milton was right when in the Areopagitica he commented on his visit to Galileo in Florence by saying: "There it was that I found and visited the famous Galileo, grown old a prisoner to the Inquisition, for thinking in astronomy otherwise than the Franciscan and Dominican licensers thought." I happen to be extremely interested in this second story and second controversy, and a critical interpretation of the affair remains one of my ultimate goals. But that is not the subject of the present work, which is rather concerned with something more fundamental, namely with the documentation of the original episode.
To be more exact, the aim of this book is to provide a documentary history of the series of developments which began in 1613 and culminated in 1633 with the trial and condemnation of Galileo. That is, it aims to provide a collection of the essential texts and documents containing information about both the key events and the key issues. The documents have been translated into English from the original languages, primarily Italian and partly Latin; they have been selected, are arranged, annotated, introduced, and otherwise edited with the following guiding principles in mind: to make the book as self-contained as possible and to minimize contentious interpretation and evaluation. The Galileo affair is such a controversial and important topic that one needs a sourcebook from which to learn firsthand about the events and the issues; since no adequate volume of the kind exists, this work attempts to fill the lacuna.
The originals of the documents translated and collected here can all be found in printed sources. In fact, with one exception they are all contained in the twenty volumes of the National Edition of Galileo's works, edited by Antonio Favaro and first published in 1890-1909. The exception is the recently discovered "Anonymous Complaint About The Assayer," whose original was discovered and first published in 1983 by Pietro Redondi; this document is also contained in the critical edition of the Inquisition proceedings edited by Sergio M. Pagano and published in 1984 by the Pontifical Academy of Sciences. My selection was affected partly by the criterion of importance insofar as I chose documents that I felt to be (more or less) essential. Since I was also influenced by the double focus of this documentary history on events and issues, I therefore included two types of documents: the first consists of relatively short documents which are mostly either Inquisition proceedings (Chapters V and IX) or letters (Chapters I, VII, and VIII) and which primarily (though not exclusively) record various occurrences; the second type consists of longer essays by Galileo (Chapters II, Ill, IV, and VI) which discuss many of the central scientific and philosophical issues and have intrinsic importance independent of the affair. Finally, my goal of maximizing the autonomy of this volume suggested another reason for including some of these longer informative essays on the scientific issues (Chapters IV and VI).

Maurice A. Finocchiaro is Professor of Philosophy and Barrick Distinguished Scholar at the University of Nevada at Las Vegas and author of Galileo and the Art of Reasoning, among other books.
or
Buy Here
Copyright © 2020 American Booksellers Association