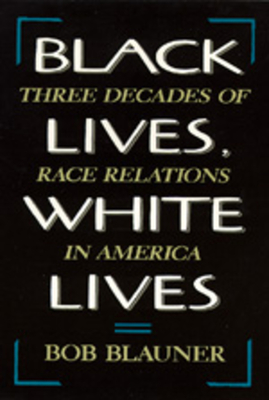 One evening in 1955, Howard Spence, a Mississippi field representative for the NAACP investigating the Emmett Till murder, was confronted by Klansmen who burned an eight-foot cross on his front lawn. "I felt my life wasn't worth a penny with a hole in it." Twenty-four years later, Spence had become a respected pillar of that same Mississippi town, serving as its first black alderman.

The story of Howard Spence is just one of the remarkable personal dramas recounted in Black Lives, White Lives. Not all of the tales told by the sixteen blacks and twelve whites interviewed are as encouraging; some are bitter accounts of failed promises, misunderstandings, and lost opportunities. Black and white, rich and poor, men and women, collectively they reveal in their own words the paradoxical realities wrought by three decades of tumultuous racial change.

Beginning in 1968, Bob Blauner and a team of interviewers began to record the words of those caught up in the crucible of rapid racial, social, and political change. Unlike most restrospective oral histories, these interviews capture "live" the intense racial tension of 1968 as people talk with unusual candor about their deepest fears and prejudices. The diverse experiences and changing beliefs of these individuals, most of whom were interviewed again in 1979 and 1986, become an extraordinary commentary on the development of race relations since the 1960s.

"Black Lives, White Lives is a sociological study with a vivid face and a warm heart. Blauner was clearly won over by men and women who shared their lives with him and his readers."
— Los Angeles Times

"A significant if often discomfiting contribution to our understanding . . . . If this book's interviewees had talked about race less candidly and naturally, if they had qualified their generalizations with the sophisticated caveats now required by polite society, we would be deprived of important insights. . . . In this book, free expression is a virtue, even when the viewpoint is lamentable."
— Washington Post

''A rich and valuable reminder of how limited our progress has been since the late 1960’s.”
— New York Times

Bob Blauner (1929–2016) was Professor Emeritus of Sociology at the University of California, Berkeley and an author who taught, lectured, consulted, and wrote on race relations.
Loading...
or support indie stores by buying on