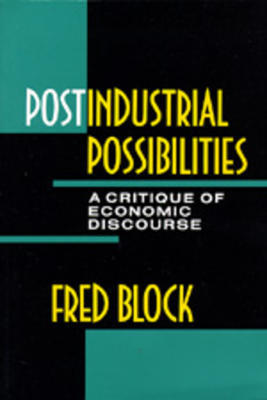 A Critique of Economic Discourse

While it is often acknowledged that we live in a "postindustrial" age, our economic concepts have lagged far behind our postmodern sensibility. In this incisive new work, the well-known sociologist, Fred Block, sheds obsolete and shopworn economic analysis by presenting a bold, sweeping reconceptualization of the economy. Postindustrial Possibilities provides a fresh understanding of the dynamics of postindustrial change while offering a roadmap for future economic thinking.

Block takes as his point of departure the tired concepts of neo-classical economics which, while still dominant, fall short as tools for comprehending contemporary economic forces. In Block's mind, the failure to revise the concepts of industrial economics means that the reality of today's economy is increasingly understood as "through a glass darkly." Intent on reinvigorating thinking in this area, Block masterfully critiques the central categories of neo-classical economics, such as the market, labor, and capital.

Block argues that the neo-classical tradition has obscured the fact that capitalist prosperity has been built not on "free markets" but rather on systematic constraints on market freedom. He further suggests that measurements of capital have become increasingly problematic and that the concept obscures the critical sources of productivity within organizations. In his far-reaching analysis of the Gross National Product, Block shows that there is a growing divergence between the factors that determine people's well-being and trends in measured GNP.

Postindustrial Possibilities sets forth a new intellectual paradigm that might be called "Qualitative Growth." One of its primary foci is a shift toward improved product quality and greater priority for various non-commodity satisfactions such as leisure, interesting work, economic security and a safe and clean environment. It also promotes a recognition that greater economic efficiency rests not on infusions of capital but on cooperative labor relations and on institutional reform.

Wide-ranging, intellectually vibrant and lucid, Postindustrial Possibilities will engender controversy and debate. It is an enormous contribution that social scientists and policymakers will need to come to terms with.

Fred L. Block is Professor of Sociology at the University of California, Davis and author of The Origins of International Economic Disorder (California, 1977), among other books.
Loading...
or support indie stores by buying on