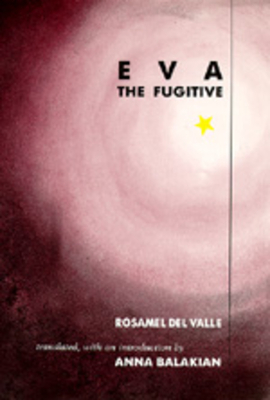 An early cameo of Latin American surrealism, Rosamel del Valle's erotic narrative of ecstasy and perdition creates the rhythm of the dream and the tempo of madness. Intermittently a waiflike young woman, Eva, intrudes into the daily routine of the writer. Her appearances are marked by a circle of red and the vision of a deep well with a star hanging over it. A tone poem of surrealist encounter, pursuit, and loss, Eva y la Fuga was written in 1930 and finally published posthumously in 1970, by Monte Avila Press in Venezuela. Anna Balakian offers here the first translation of the work into any other language. She brilliantly conveys in English the author's highly metaphoric language and the immediacy of surrealist experience, signaled in the narrative by frequent lapses into a haunting present tense.

On their walks through the streets of Santiago, Eva and the narrator mingle in the fiesta atmosphere of the Chilean Amusement Park, with its gigantic Ferris Wheel. Bits of real-life dialogue float through the air. But the couple move on different wavelengths from the crowd and often from each other. Passing in and out of his life, Eva exercises a hypnotic fascination over the writer and makes an equally profound impression on the reader. This narrative is in the same genre as Gerard de Nerval's Aurélia, André Breton's Nadja, and Michel Leiris's Aurora, and should be counted among the most compelling works of twentieth-century surrealist literature.

Rosamel del Valle, known primarily as a poet and essayist in Latin America, came to New York from Chile as a United Nations official in 1946. He contributed regularly to Spanish-language periodicals, writing about life in New York, literary landmarks, and American writers, for whom he expressed a near veneration. He married a French-Canadian co-worker, Thérèse Dulac, in 1948 and after his retirement returned with her in 1963 to Santiago, where he died in 1965. Anna Balakian is Professor and former Chairman of the Department of Comparative Literature at New York University. Among her many writings are several books on Surrealism, including Surrealism: the Road to the Absolute, and a critical biography of André Breton.
or support indie stores by buying on
Copyright © 2020 American Booksellers Association