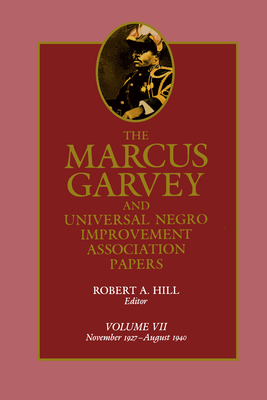 The publication of Volume VII marks the completion of the American series of The Marcus Garvey and Universal Negro Improvement Association Papers. This final book in the seven-volume set charts the magnetic, controversial Pan-African leader's career from his deportation from the United States in November 1927 to his death in England in 1940.

The volume begins with Garvey's triumphant welcome in Jamaica, his tour abroad, and his entry into Jamaican party politics. It traces his reshaping of the organizational structure of the Universal Negro Improvement Association (UNIA) in the late 1920s, and his management of UNIA affairs from Kingston and London in the 1930s. Though typically seen as a time of decline, this final period of Garvey's life appears, in editorials drawn from his publications, as a fruitful one in which some of his strongest political writings were produced. Surveillance reports filed by Jamaican police and British colonial officials provide a rich account of Garvey's speeches and activities. Although he was banned from the United States and restricted from traveling or speaking in many areas under colonial supervision, Garvey nevertheless traveled widely after his deportation, visiting and influencing affairs in Geneva, Paris, and London, and making organizational tours of Canada and the Caribbean. He chaired UNIA conferences in Toronto and inaugurated the School of African Philosophy, a series of lectures designed to train UNIA leaders. In the mid-1930s he moved the headquarters of the UNIA to London.

In the final months of his life, correspondence between Garvey in England and his young sons in Jamaica shows the personal side of the public leader. The tragedy of Garvey's personal demise is framed by the cataclysmic events of Europe entering a world war and by the decline of the movement he had worked so diligently to build. The long financial hardships of the previous decade and the loss of Garvey's presence had winnowed the membership of the UNIA. Garvey suffered a disabling stroke in January 1940. He died in London the following June, as Italy invaded France and Germany prepared to occupy Paris. Volume VII ends with the reconstitution of the UNIA in the months immediately after Garvey's death and the establishment of a new headquarters with new leadership in Cleveland.

Robert A. Hill is Director of the Marcus Garvey and Universal Negro Improvement Association Papers Project in the African Studies Center at the University of California, Los Angeles, where he is also Associate Professor of History. Barbara Bair is associate editor of the American series of the Marcus Garvey and UNIA Papers Project.
Loading...
or support indie stores by buying on