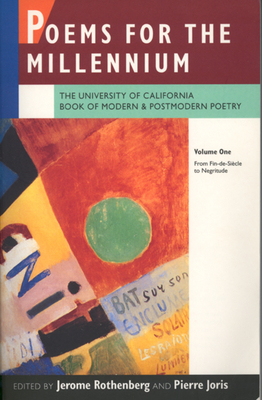 Poems for the Millennium, Volume One

The University of California Book of Modern and Postmodern Poetry: From Fin-de-Siècle to Negritude

As we come to the end of the century, the entire vista of modern poetry has dramatically changed. Poems for the Millennium captures the essence of that change, and unlike any anthology available today, it reveals the revolutionary concepts at the very heart of twentieth-century poetry. International in its coverage, these volumes depart from the established poetic modes that grew out of the nineteenth century and instead bring together the movements that radically altered the ways that art and language express the human condition.

The first volume offers three "galleries" of individual poets—figures such as Mallarmé, Stein, Rilke, Tzara, Mayakovsky, Pound, H.D., Vallejo, Artaud, Césaire, and Tsvetayeva. Included, too, are sections dedicated to some of the most significant pre-World War II movements in poetry and the other arts: Futurism, Expressionism, Dada, Surrealism, Objectivism, and Negritude. The second volume will extend the gathering to the present, forming a synthesizing, global anthology that surpasses other collections in its international scope and experimental range.

Poet-editors Jerome Rothenberg and Pierre Joris provide informative and irreverent commentaries throughout. They challenge old truths and propose alternative directions, in the tradition of the revolutionary manifestos that have marked the art and poetry of the twentieth century. The result is both an essential source book for experiencing the full range of this century's poetic possibilities and a powerful statement on the future of poetry in the millennium ahead.

Praise For Poems for the Millennium, Volume One: The University of California Book of Modern and Postmodern Poetry: From Fin-de-Siècle to Negritude…

“Poems for the Millennium: Part One is . . . one of the very best of its kind.”
— Kaurab Online

Jerome Rothenberg is a poet and one of the world's leading anthologists. His more than fifty books include Technicians of the Sacred: A Range of Poetries from Africa, America, Asia, Europe and Oceania (California, 1985). He is Professor of Visual Arts and Literature at the University of California, San Diego. Pierre Joris is a poet and has published over twenty books and chapbooks of poetry as well as many anthologies and translations. He is Professor of English at the State University of New York, Albany.
Loading...
or support indie stores by buying on