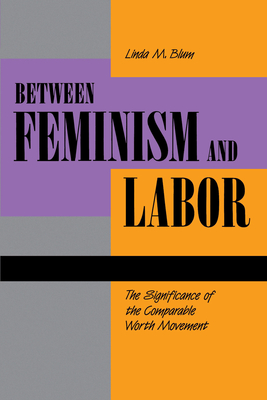 Between Feminism and Labor

The Significance of the Comparable Worth Movement

"Equal pay for equal work" has long been a forceful slogan of the feminist and labor movements. Now, however, as the American economy depends more and more on "women's work," it has become clear that this objective does not benefit the majority of women, who are employed in sex-segregated jobs. In Between Feminism and Labor, Linda M. Blum examines the movement for comparable worth, or equal pay for comparable work, as a strategy to raise wages for the "pink-collar" jobs that are most frequently occupied by women. She explores the larger political implications of the movement and provides the first study of pay equity to focus directly on the mobilization of the female work force at the grass-roots level.

Through two case studies of local comparable worth movements—in San Jose and Contra Costa County, California—Blum probes several important issues. She asks whether comparable worth can contribute to the formation of active labor-feminist alliances, and after a nuanced, intelligent analysis of the complexities and contradictions of comparable worth, endorses its radical potential to improve women's wages and forge links between gender- and class-based politics.

Between Feminism and Labor also situates comparable worth in the context of the limitations of affirmative action, a strategy seeking to move women into male jobs as opposed to raising the value of women's work. It is the first study to contrast these two strategies and to place them within the theoretical and political debates over the validation of gender difference versus the requirement of gender neutrality. As such, the book should stimulate debate among those concerned with the future of the feminist movement, as well as those interested in the future of organized labor and progressive politics in America.

Linda M. Blum is Assistant Professor of Sociology at the University of Michigan.
or support indie stores by buying on